The history of the site where Prague’s Municipal House now stands is both interesting and complex. The adjacent Powder Gate, a unique fragment of Prague’s Old Town fortifications dating from the Gothic period, recalls the times when an important trade route arrived at this point. This was probably only one of many reasons why King Wenceslas IV. decided in the late 14th century to establish his residence in this area, beside the fortification walls. The residence was given the name King’s Court.

The site also served Bohemian rulers during the unsettled times of the Hussite revolution, and was finally abandoned only when Vladislav II of the Jagellon dynasty left the place and moved back to Prague Castle. As late as 1475 however, King Vladislav personally laid a foundation stone for a new gate that was to be built in the fortification wall to replace the previous one which was so run­down it had been nicknamed the ”Ragged Gate”.

The Habsburgs who began their reign in Bohemia in 1526 were no longer interested in the King’s Court and left the former royal residence unoccupied. The empty and deteriorating palace was purchased in 1631 by Cardinal Arnost Harrach from Polyxena of Lobkowitz, who established an archiepiscopal seminary there. Following a fire in 1689 the complex was rebuilt and remodelled, and St. Vojtech’s Church was added.

At that time the gate was used as a storage place for gun­powder and that’s how it later got its name the Powder Gate or Powder Tower. In 1776 the seminary was moved to the Klementinum and King’s Court was then used by the military who converted it into a barracks. In the late 19th century this building later became a military academy.

The turn of the 19th and 20th centuries in Prague was marked by a mighty wave of sanitation reform and slum­area clearances which were intended to contribute to turning Prague into a modern European city. The King’s Court site became a great challenge for the city authorities. The whole complex of the former seminary as well as the St. Vojtech’s church were eventually torn down. A year later, the small shops that had stood to the east of the Powder Tower were also demolished.

Design and construction of the Municipal House

The idea of using the former King’s Court plot as a site to build an outstanding and representative building for the Czech kingdom’s capital was first initiated by a Prague Civic Society memorandum, submitted to the Town Hall authorities in 1901. The request proposed the creation of a center for Czech official and social undertakings, citing among other reasons the necessity for a counterbalance to a German casino and the German House (now Slovanský dum — the Slavic House) on Na Príkope Street.

In 1903 an architectural competition took place. Three designs by the architects Dryak, Pospísil and Balsanek received awards, but not even the second round of the competition produced a winning design and so the Prague City Council decided that the architects Professor Antonín Balsanek and Osvald Polívka would be commissioned for the project. The work was supervised by a nine­member committee which included councillor Prof. Josef Schulz, architect Jirí Stibral and architect Vaclav Rostlapil.

The final design and a 3,000,000 crown budget were finally approved after a series of delays on 10 December 1904, and in the summer of 1905 the firm Schlaffer & Sebek began the construction work. Some of the sections were put into use as early as 1909—1910 while the entire building was officially opened on 22 November 1912.

The Municipal House is one of the most remarkable constructions of Prague Art Nouveau. At the time of its creation it was critisized by some architects as its style was considered to be formally outdated.

The lapse of almost a century since then allows us to forget about the emotions and controversy of those times and to appreciate this building as a unique harmony of architectural and painting styles of the turn of the 19th and 20th centuries. Neo­Baroque, Neo­Renaissance, and both Western and Oriental influences fuse together with Czech Art Nouveau. The impression this building gives is enhanced by a wide range of decorative styles and materials, as well as by the high quality of craftmanship. The monumental appearance of the building is crowned by the outstanding decor created by most of the prominent Czech artists of the day, namely the painters Mikolas Ales, Vaclav Jansa, Alfons Mucha, Jakub Obrovský, Jan Preisler, Josef Wenig, Karel Spillar, Max Svabinský, Josef Ullman, Frantisek Zenísek, and the sculptors Josef Maratka, Josef Vaclav Myslbek, Karel Novak, Ladislav Saloun, Frantisek Uprka, Bohumil Kafka and Cenek Vosmík.

The building was equipped with all the modern facilities of the time, including central heating and ventilation, drinking and utility water­supply system, suction removal of dust, cooling of the cellar, ice­making, electrical as well as hydraulic elevators, steam­powered laundry, laundry drying room, bottle­washing facility, transformer station, accummulator station, tube post and an intercom network.

The Municipal House has undergone several partial reconstructions. The latest was a thorough renovation and took place between 1994 and 1997. 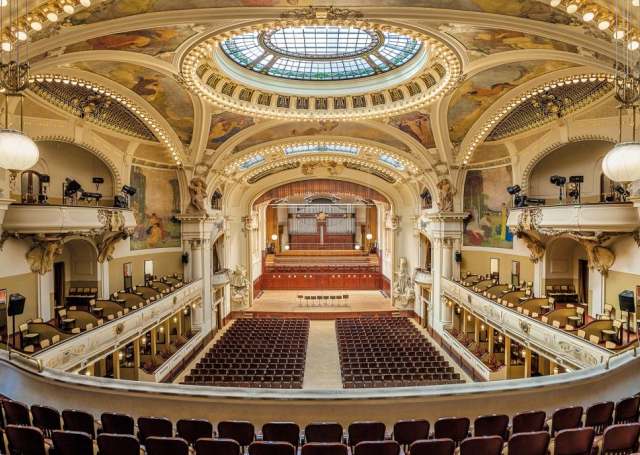 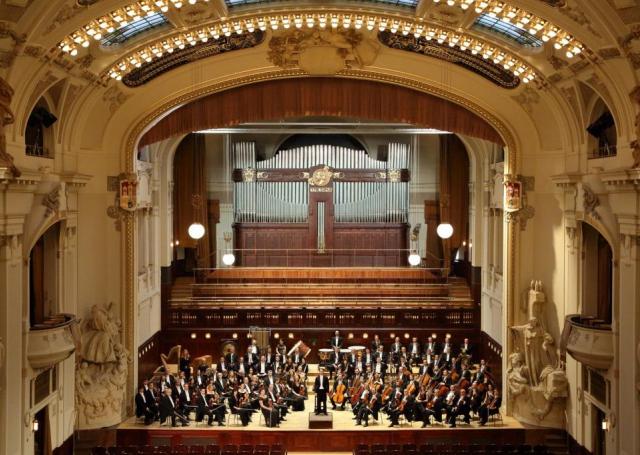 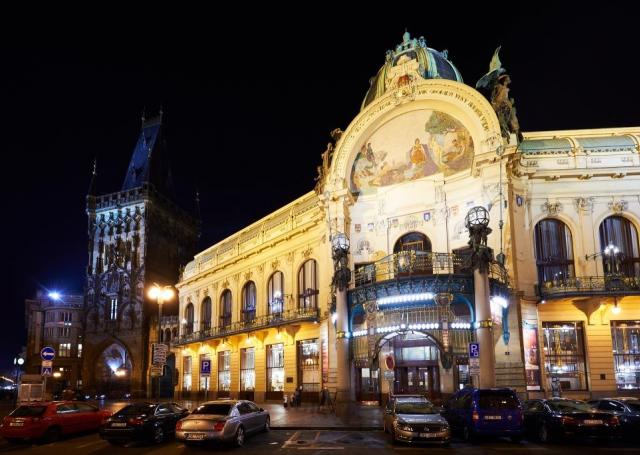